Finnish Startups Attract the Most Venture Capital in Europe

In 2017, Finnish startups and early stage growth companies raised the fourth highest amount of VC funding in Europe. “It is humbling to see that the persistent, long-term efforts are working in our favor and bringing results, and that the Finnish top-tier knowhow attracts VC funding. I believe we are ready to set our ambition level even higher”, comments Pia Santavirta, managing director of Finnish Venture Capital Association.

The Finnish startup ecosystem is rapidly maturing on many fronts. The development is mirrored by the fact that Finnish startups raised the highest amount of funding to date in 2017, as the total financing figure hit 349 million euros. More importantly, over 10M€ financing rounds are raised more frequently than before, and the number of foreign investments into Finnish companies has increased tenfold since 2010. The amount of new funds raised by Finnish VC firms also hit a record high since 2008, as firms raised €169 million worth of new funds.

However, the fastest growing stage in Finland is still the seed stage, and the average size of new Finnish VC funds raised between 2013-2017 is some €40 million. At the same time, European venture funds raised on average almost €100 million at final closing in 2017 – almost double the average of ten years ago. 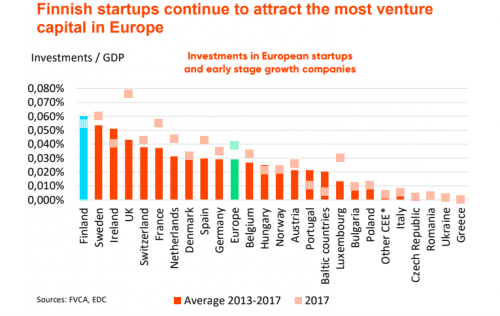 “For Finland to be able to compete globally in the long run, we need more VC funds capable of leading substantial, international financing rounds from stage A onwards. As an example of positive legislative initiatives boosting the startup ecosystem, we just introduced The Finnish Startup Permit that makes it possible for international growth entrepreneurs to build a startup in Finland and to become part of Finland’s vibrant ecosystem. Next, we are working on making Finland the most attractive country in Europe for international fund investors”, states Santavirta.

That’s a plan we can get on board with!

Chief News Editor at Slush. Likes Italo-Disco and power shoulders. Knows everything about everyone. That's why her hair is so big. It's full of secrets.