Spotify has become the number one commercial music streaming service with a global user base of over 40 million music lovers. At Slush, Co-Founder and Chairman Martin Lorentzon sat down with Miki Kuusi to discuss the path to success surrounded by the Nordic startup scene, accompanied with personal views on the very essence of entrepreneurship.

It All Comes Down to Perseverance and Execution

Martin Lorentzon has been actively involved in the startup scene for a long time. After starting his first venture in 1998 at the age of 29, Lorentzon has since developed an eye for spotting emerging market trends and finding the right people to turn his ideas into reality. “After all, I’m really good at two things – finding the good and smart people, and looking into the crystal ball to predict the future”, Lorentzon summarizes.

Since 2006, Spotify has grown from a Stockholm-based startup into a global phenomenon to fundamentally disrupt the music industry. “From early on, Spotify’s business model has focused on providing users with real-time access to music instead of full ownership, and other industries have followed the lead. Nowadays, we have Netflix, Airbnb, and other industry-defining companies, all focusing on the increasingly popular access model.” 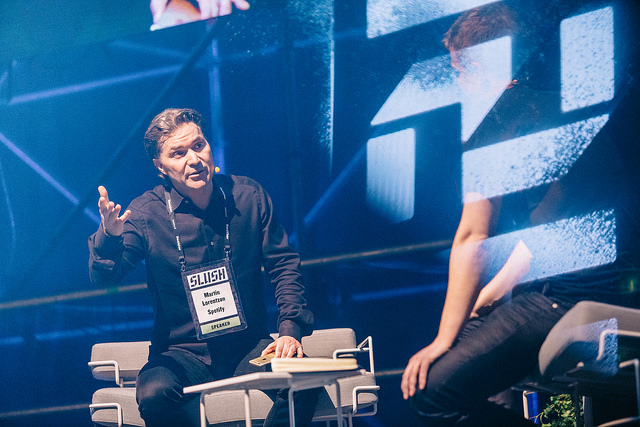 When asked about the drivers behind Spotify’s success, Lorentzon emphasizes the importance of perseverance. “It took us 2,5 years to convince VCs of our business idea and obtain test licenses for online music distribution in Sweden. In the beginning, investors and record companies were laughing at us. You’ve got to attack like crazy to succeed, there’s no other way.”

In addition, Lorentzon states the ability to execute as the main indicator of future success. “Execution and finding the good people account for 97% and business idea only for 3%. People usually overestimate the significance of the business idea, although the idea really doesn’t matter that much. Execution is the ultimate key to success.”

In addition to promoting perseverance and execution, Lorentzon talks a lot about the true meaning of company culture and employee commitment. Although Spotify has grown into a multinational organization with over 1,500 employees, the company still arranges regular induction sessions for its employees in its native Sweden. “Every year, we arrange an introduction day for our new employees in Stockholm. I have been on board for ten times. After all, we’re a tech-savvy company driven by our developers. Everything is about the culture.”

About the Emerging Nordic Startup Scene

According to Lorentzon, the Nordics form an ideal environment for early-stage startups. Having debated the Nordic countries for a long time, Lorentzon says Finland and Sweden are developing “nicely”, especially due to the emergence of the booming gaming industry in the area. “In order to find the next Nokia, we need to support each other. We really need more companies in the region.” 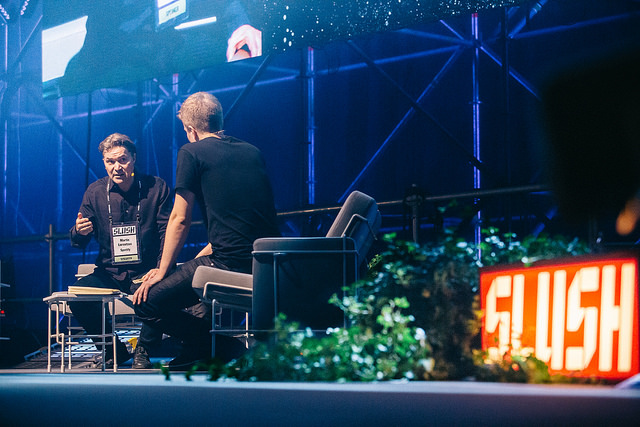 However, securing VC funding may be tricky, especially in the early stages of developing a new company. “The Nordic region is still lacking adequate VC money, which became quite evident during my first years at Spotify. Surprisingly, I had to finance a lot of development out of my own pocket.” In the future, Lorentzon hopes to start “pouring Spotify money into other ventures” to support the emerging startup scene in the area, following in the footsteps of Niklas Zennström, CEO and Founding Partner of Atomico.

Ending the session, Lorentzon shares his most useful tips for aspiring founders and entrepreneurs at the beginning of their journey. “When you start a company – be two persons, don’t do it alone. It’s a bumpy road ahead. Two people would be ideal, three or four is already too much. You should be equals, but still have a different angle looking at the business.”

Lastly, Lorentzon highlights the vast importance of experimentation, referring to the classic method of trial and error. “Debate what’s good and what’s bad, and finally you will get there.” Following the initial steps of coming up with a feasible business plan, the team should focus on building a prototype and start talking to VCs with a realistic vision in mind – combined with dynamite perseverance and execution.

Return To Roots – The 2018 Gaming Track from Berlin to Helsinki

The Economist stated in 2011 that games will be the fastest-growing form of mass media over the next decade. In 2017, the numbers of the gaming industry were staggering: 2.2 billion gamers and $121 billion revenue with 10.7 % annual growth rate (CAGR). This year the industry is expected to grow $137.9B in revenues. Games […]

The State of European Tech Needs You: Take the Survey!

This December, with Atomico and Orrick, Slush will once again publish the annual State of European Tech report. It is the most comprehensive deep-dive into the European ecosystem. Coming out for the fourth time, this year’s report will bring diversity and inclusion into focus, to highlight the importance of the issue at hand. Take the survey […]

One of the Slush core missions now and forever is the advancement of entrepreneurs’ and investors’ abilities to navigate the tech ecosystem and invest with impact. Yesterday, we took yet another leap towards attaining this goal with the release of The State of South Asian Tech (SEA) report in Singapore, yesterday. Like the State of […]

How Happeo Raised $8M with a Pragmatic Outlook

Happeo, a digital workplace platform focusing on smoothening the collaboration between employees of large companies, recently raised $8M for their seed round, having names such as Gapps, Vendep, DN Capital and Maki.vc amongst their investors. We had a chat with Happeo CEO Perttu Ojansuu in order to learn a bit more about the journey behind […]

Why Startups Matter – For Us All

Slush talks a lot about the different phases of founding a startup. We talk about building, scaling, growing, recruiting, funding and everything in between. All of these things are essential, but to understand the relevance of everything we do, we should also look into the very DNA of what a startup is and where they […]

Helsinki-based Yousician, the world’s leading music education company, has been on an almost decade long journey of learning about gamifying, community building, and of course, learning new instruments. CEO and co-founder Chris Thür has been leading the charge towards the company’s goal of making musicality as common as literacy, and overseen lots of change in […]

Last week, a new era for Slush Global Impact Accelerator kicked off. Slush hosted a workshop for startup hub managers – coming from five different countries – in Botswana. For the past three years, the GIA team has been running the program all the way from Finland. However, now we’ve decided to take off from […]