Ever imagined what it would feel like to be in space? Undoubtedly you have, but there are only a handful of people who have actually experienced it for themselves. We are lucky to have one of them speaking at Slush this year. Let us introduce you to Leland Melvin!

Melvin, an American engineer and NASA astronaut, flew two missions on the Space Shuttle Atlantis in 2008 and 2009 to help build the International Space Station. He is a great example for any entrepreneur, since difficulties have never made him stop chasing his goals. Melvin is a former NFL player, who had to quit his football career after injuring himself – so instead, he trained to be an astronaut. Even going partly deaf during his water training didn’t stop him.

In addition to spending 565 hours in space, Melvin has worked as the Head of Education at NASA, been the chair of the International Space Education Board and worked for the White House to plan the nation’s STEM education. Melvin believes it is important to add Arts to the education of Science, Technology, Education and Mathematics (STEM), since he is not only an astronaut but also a photographer and a musician.

On his Twitter account, Melvin tweets about global warming, social inequality and preserving peace. He hopes to create lasting positive change in communities by speaking of his own experiences. We asked the astronaut a few questions on his views. 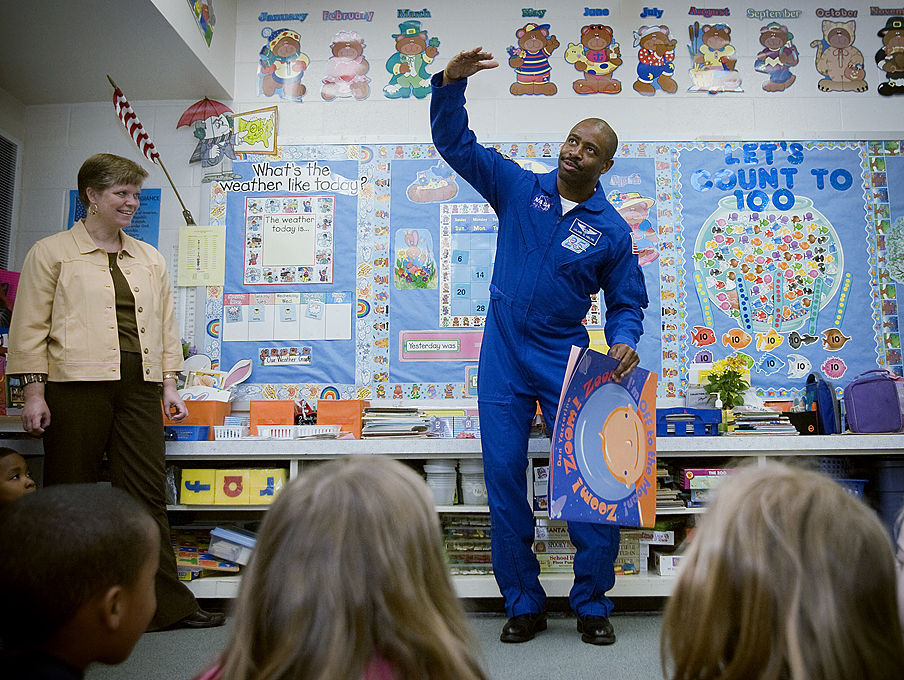 Leland, how does one become an astronaut and what is the most challenging part of the career?

The requirements for Astronaut Candidates are a bachelor’s degree from an accredited institution in engineering, biological science, physical science, or mathematics. Degree must be followed by at least 3 years of related, progressively responsible professional experience or at least 1,000 hours of pilot-in-command time in jet aircraft. Teaching experience is also considered to be qualifying. An advanced degree is desirable and may be substituted for experience. Additional requirements include the ability to pass the NASA long-duration space flight physical.

For me, the most challenging part of being an astronaut was the water survival training and going to the potty in space since you can’t train effectively for that on the ground.

You have worked in extreme conditions during your two space flights, and startups have to survive in a pretty pressured environment, too. Is there some piece of advice on the matter that you could share with entrepreneurs?

Navigating extreme environments really boiled down to training and being prepared for the unknown by depending on the crew’s core set of skills. In space, one day the toilet or the oxygen system could break, and whether you were specifically trained on doing that task or not, you had to fix it. I learned from my Marine commander that you must take care of your people first. This is told in my friend Simon’s book “Leaders Eat Last”, which describes the ethos of the Marine Corps. It’s extremely important for a company to have a core set of skills and values, the right people with the right tools and for leaders to eat last.

How has your NFL career affected your experiences as an astronaut and an educator?

My NFL career helped me understand what working on a high stakes team was all about, and that precision and timing really make the difference between success and failure. The same thing happens on a Space Shuttle mission where one wrong switch throw or mistimed event can lead to failure and loss of life. So, as an educator, I try to ensure students understand the consequences related to their actions.

What inspires you the most in educating people about science and space?

One of the things that inspires me the most is when a kid that was given up on or told she/he will never amount to anything gets inspired, starts to believe and achieves things that some only dream about. That’s what really gets me stoked.

Why did you become interested in adding art to STEM, and started working with STEAM?

STEAM embodies all disciplines in education. In project based learning, you need the “A” to help express concepts while designing, building, testing, and eventually trying to tell a compelling story. Also, the arts are what tie us together culturally. They make us human.

What kind of expectations do you have for Slush 2014?

When I went to space on my first flight, my Astro colleagues tried to tell me what I would feel and described what I would see. I told them to stop because I wanted to experience it real time. My expectations are high but I’m waiting for the real time experience.

Joanna is an information networks student, who is passionate about design and creative ideas that make a difference. She wants to help startups flourish by delivering inspirational stories through Slush News and the social media.