Nicholas Haan, Director of Global Grand Challenges at Singularity University announced today at Slush: Finland will be hosting its first Singularity Global Impact Competitions in 2015. The winner is invited to attend the crown jewel – ten weeks’ Graduate Studies Program organized in California during the summer.

Since its inception 2008, Singularity University has helped individuals from more than 85 countries to apply exponentially growing technologies to address humanity’s grand challenges such as food, health, poverty, education and environment.

“We live in the world where one billion people go to bed hungry, and this is not acceptable,” said Nicholas Haan in his inspiring talk on the stage of Slush. At Singularity University Haan gets to mentor a wide range of innovators from all over the world, each of whom is challenged to leverage exponential technology to benefit billions of people.

According to Haan, one of the most important question for anybody joining Singularity is how they can positively impact one billion people in next decade. In just six years, Singularity University’s alumni have generated more than 100 startups that help crack the world’s biggest problems. 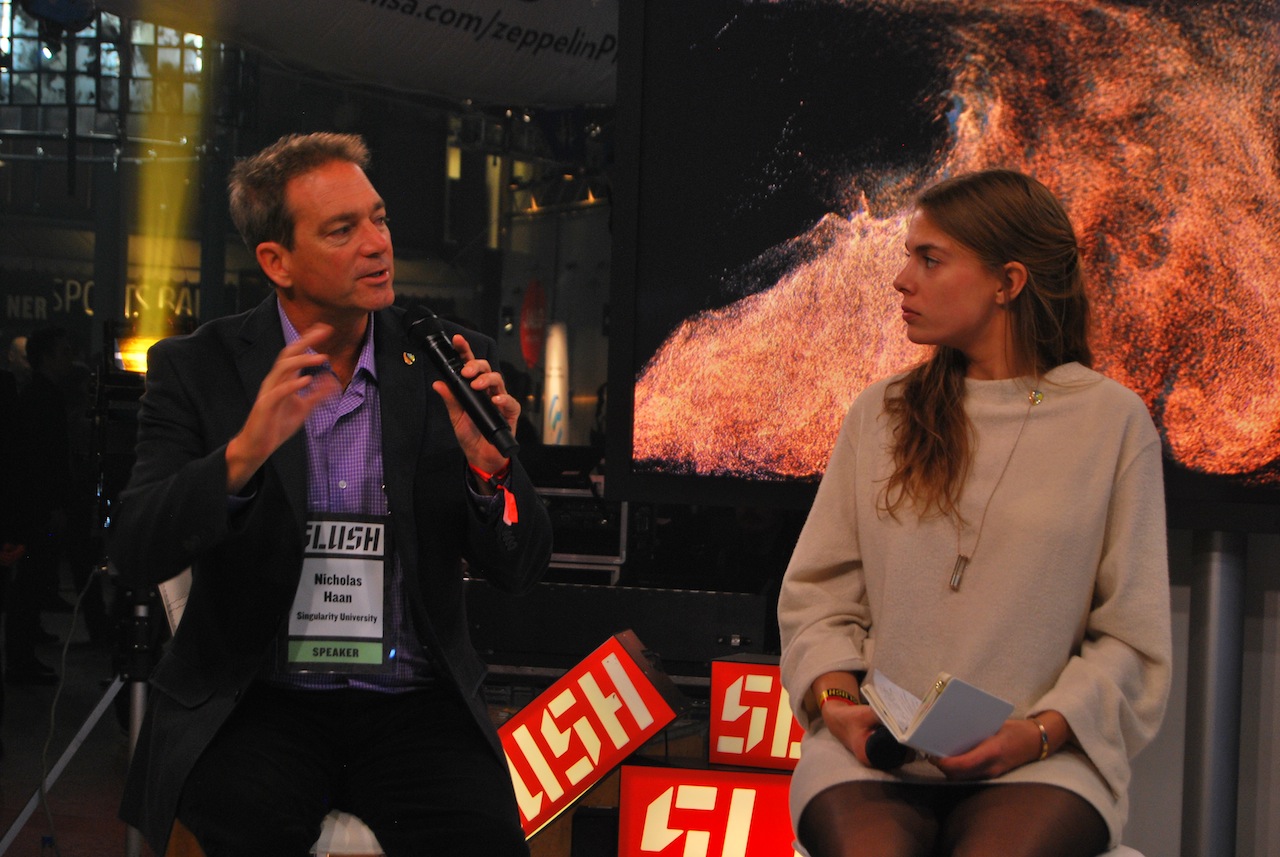 The Applications for Global Impact Competition Open on 15.12.14

Overall, the mission of Global Impact Competition is to encourage locals in Finland and many other countries to develop innovative solutions to local, pressing problems with the hope that some of these solutions would be actually implemented in those locations. In 2014 the GIC was organized in 20 countries with a total of 25 GIC winners.

The application process is not a straightforward “send your CV”-type, instead all the applicants are invited to submit their ideas on how they would solve a big challenge in Finland, including exponential development in technology.

We caught up with Nicholas Haan to hear about what inspires him most at the moment:

“Exponential technology creates whole new opportunities to solve humanity’s grand challenges in that it becomes more digitized, democratized, demonetized, and dematerialized. Exponential trends in the performance of computing is mirrored in a wider range of industries:  the price of decoding the human genome is plummeting, the price of solar production is plummeting, and so on.

Increasingly technology is in the hands of innovators around the world–including the people who are most facing challenges. This is a great transformation and is certain to create a plethora of solutions on local and global scales.”

Which of your life experiences have shaped your understanding of the world’s biggest problems?

“I feel very fortunate to have a wide range of life experiences that help me to understand the world’s grand challenges: living with homeless people, teaching in a small rural school in Kenya, living for 7 years in villages without running water or electricity, working to end global hunger, and helping to eradicate a blinding eye disease. These experiences have given me a deep appreciation of the imperative to solve global challenges and the social complexities that arise when trying to do so.”

Why did you decide to join Singularity University and what motivates you to do what you do?

“Working at Singularity University is a huge privilege and opportunity to work with some of the world’s brightest people who are committed to solving humanity’s grand challenges.  Singularity University allows me to think big and differently about helping to create a positive vision of the future where everyone’s basic needs are met and people can thrive.”

What has recently been the most exciting project brought to life at Singularity University, in your opinion?

“A couple projects come to mind:  Last year we had a team project called Miroculus develop a whole new way to detect a range of cancers using a single drop of blood and a very low cost unit–this would completely change the way we monitor for cancer and other diseases and allow for early detection and more effective treatment.

Another company that excites me is called Modern Meadow, which will disrupt the livestock industry by creating leather and eventually meat products in-vitro, i.e., in a petri dish.”

Regina, what drives you to be part of Singularity University?

“Some of my best memories have been meeting participants at the beginning of the Graduate Studies Programs and watch them being transformed during the 10 weeks to individuals who truly believe and do their best to impact a billion people within a decade. This motivates me to start each day with the knowledge that I am at the right place and playing a role in making the world a better place.”

Can you think of a project that has gone from a concept winning the GIC to becoming a solution solving global problems?

“Yes, one that quickly comes to mind is the 2014 Global Impact Competition in Brazil that was themed “Urban Mobility” addressing traffic congestion in cities. The winning project “Transit Service” by Breno Assis  is a cloud-based platform that integrates all São Paulo’s public transit data. It provides information for mobile apps, big screens and intelligent terminals.

Currently the app is being used by over 100,000 people to provide ETA for buses and trains, nearby transit routes, creation of routes from one location to another, alerts when the bus is approaching and when to get off the bus. The system informs the public thus reduces anxiety over wait times, brings more routing options, giving users more control over their commute which will increase number of people using public transportation and eventually help with traffic congestion.”

Elena has worked in the marketing roles at several successful startups in Finland and written about startups and growth companies for technology blogs. She's always on the lookout for inspiring stories for Slush News.